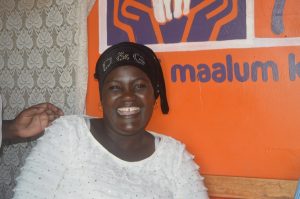 The music out of a speaker standing at the entrance to Faith Medical Clinic blares the latest tunes as a DJ interjects every now and then inviting the townspeople of the quiet Lugari town to visit the clinic to learn about contraceptives as they get screened for cervical cancer. We have arrived in the early hours of the afternoon to observe this outreach in one of our Tunza facilities which is owned by Faith, a retired nurse, as well as interact with residents to hear their experiences with contraceptives and cervical cancer.

I am met by two Tunza community workers who we fondly refer to as our Tunza mobilizers. They have been scaling Lugari for about a week now informing residents of this event and urging them to attend. They are in the middle of a small group counselling session with some women who nervously ask questions regarding the myths they have heard about modern contraceptives. “I have heard that I will not have a child after using the coil (IUD), “one of the women remarks. “That is not true,” another woman interjects before the community worker can respond. “I have used it and I had a child after removing it,” the woman adds. Her words cause some murmurings and she is allowed to speak about her experiences. I am intrigued and after the session call her aside to hear more.

Her name is Hadija Haji, a 35 year old mother of 4 children. Hadija is a regular at this clinic because she says she trusts Dr. Faith as the residents call her. In fact, Hadija has called this her home clinic since 2012 when she visited here to get her IUD. “I heard about the coil when a Tunza mobilizer came to my village to tell us about the many contraceptive methods that the clinic was offering. I liked the way she explained about the methods and it gave me confidence to visit the clinic,” she said. Hadija however had her reservations, she had heard so many negative things about getting the coil, including the fact that it would make her infertile but she decided to give it a try. “I also heard that it would give me back pain and make sex uncomfortable but nothing like that happened. Also, the doctor was so kind and the process had no pain,” she added.

In 2012 I wanted to make sure I do not get pregnant because my husband and I were not ready or financially capable of having a child. I was a little afraid when I broached the subject with my husband but after hearing from the Tunza mobilizer and Dr. Faith, he was on board. For 4 years she lived a pregnancy-free life and then she was ready to have children again so she visited the clinic to have the IUD removed. “After the IUD was removed I was worried that the myths on infertility would be true but I had no issues getting pregnant again. I had my child and after 2 years of taking care of my baby, I knew it was time again to get the IUD which I did earlier this year and like before, all is well,” she says beaming.

Hadija is this gathering to speak to women who have reservations about using an IUD to prevent pregnancy. Her story is a beacon of hope to so many