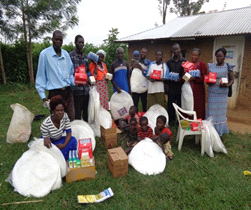 Mumbule CBO was established in 2011 by community members in East Sangalo Ward to solve health problems that were affecting them. Members are drawn from different sub-locations in Kanduyi sub-county of Bungoma County.

While they had the passion to get things moving, they however lacked the capacity on how to move forward with their goal of enriching the lives of their communities. Enter the USAID funded Health Communication and Marketing (HCM) project which empowered the CBO to effectively communicate on health issues and in addition provided them health products ranging from insecticide treated mosquito nets, repellent lotions and jelly, Kinga soap, Aqua tabs and Water guard  to generate income for the group. The CBO also distributes free condoms on behalf of the government.

Through UZIMA foundation, 10 members of Mumbule CBO received training on Interpersonal Communication using Education Through Listening (ETL) so they could effectively conduct small group communication sessions.  So far the group has conducted 204 small group sessions and reached 5168 community members over a period of five months in East Sang’alo ward.

But the CBO was going to face their biggest challenge yet since they needed to convince Consolata Naliaka about the health benefits they were talking to her women’s group about. Naliaka, a staunch catholic was on her way from a prayer meeting for her cell group known as Jumuia when she came across a small group session being conducted by a member of Mumbule CBO. The topic being discussed at the time was Malaria prevention. Naliaka has always had the conviction that good health is a gift from God and therefore was against interventions such as the use of health products to avert sickness. This discussion prompted her to share her views on the matter and she joined the lively discussion, challenging the facilitators on a number of issues with the rhetorical questions she was asking.

Using the skills he had gained from the ETL training, Ben Wanjala who had been facilitating the session engaged Naliaka who during the exchange between her, Ben and the other people in the group discussion realized that unconsciously, she has been using the very health products she was vehemently against, albeit not correctly. “As we spoke, Ben redirected my questions to the group and when they gave answers, I found that I was also agreeing with the answers that were being discussed. I eventually agreed that it is important to use the treated nets although I know I was not using the net every night as advised,” narrated Naliaka. She also confessed to Ben that she really knew the risk she was putting her family not sleeping under the treated nets every night but her husband was the greatest barrier since he had reservations against using the net and that is why she had opted to shelve the topic. “I can see it is going to be a challenge to introduce this topic again but I need to protect my family from Malaria,” she added confidently. 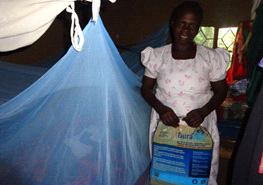 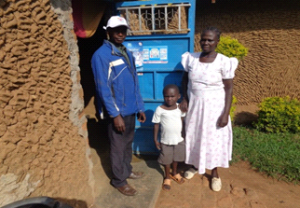 Naliaka at her home and with Ben from Mumbule CBO